Help Us Save Ukraine!

I Heart Ukraine is a US-based non-profit organization with the main mission of helping Ukrainian people in their fight against the Russian onslaught and help restore peace. Further, continue helping with rebuilding Ukraine’s infrastructure and livelihoods.

We are a group of volunteers mainly located in the NY and NJ area of the United States. Many of us are Ukrainian Americans who still have families and friends in Ukraine so this mission is very dear to our hearts.

We mobilized immediately when the war started. We strive to be the Western supply partner to many on-the-ground efforts in Ukraine. We realize that the need is enormous and we are doing our part, as do millions of people outside of Ukraine.

How you can help

We raise funds and donations based on the current needs of the Ukrainians. We monitor and gauge the needs in our daily conversations with people on the ground in many regions of Ukraine – doctors, territorial defense members, volunteers. We meet their needs by getting the right equipment and supplies efficiently and quickly.

God bless you and your family!

How Can I Help?

We ask that anyone who can please contact your federal elected officials (congressmen and senators). You can find your reps and their contact information here: Why bother getting involved?

Ukraine is a western values democracy full of intelligent and hard-working people, striving for freedom from the soviet-style Russian stronghold. It is imperative that Ukraine (the largest country by land fully located in Europe) not fall to a repressive dictatorship by means of brute force, as currently displayed.

Should Ukraine fall, while west stands by fearing military confrontation with Russia, Putin would quickly annex Estonia, Latvia and Lithuania thereby connecting with his de-facto control of Belarus, and detached Kaliningrad region. This would bring back most of the USSR back, which he feels is his God-mandated duty (expanding the Russian empire, a.k.a. USSR).

We don’t believe that while the West is sitting on sidelines in this war, would all of sudden jump and act just because baltic states are NATO members. There will be late fear-driven excuses that “it’s not a war, it’s a ___ insert some late euphemism for war here…” and therefore action is “not yet” necessary. Here are some sanctions. Putin’s taking the Baltics states (population 6mil) will be faster than Ukraine (population 44mil).

The time to act and confront the evil is now. It will be too late if Ukraine falls.

But what about all the other wars we didn’t get involved in? Well, we can sit this one out and watch Russian artillery shoot Ukrainian buildings and people, or we can say NO.

Let us know of a charity / on the ground organization that we should feature here. 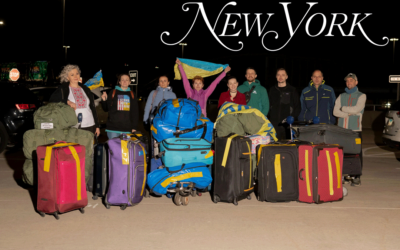 One Seat in Coach, 36 Suitcases, and Enough Kevlar to Fight a War. The Ukrainian Americans supplying an army on their own.

In a black T-shirt that says “warrior” in Ukrainian, Ivan Sikorskyi swerves around potholes on the Queens cemetery belt in his Dodge Caravan with a silver chrome skull on the top of the gear shift. Behind him are two blue duffels and a suitcase filled with body armor,...